how do i send units

When you get to that part in the dialogue it will be done automatically :)

Amazing game, loved every little thing about it, but the monster completely broke my immersion. It didnt even spook me if that was your point, i was just "why the fuck, i dont care, the girl is gonna die holy shit let me go back to my controls!"

Great demo! I just finished the game and wanted to say:

1- The game should be continued, I love being able to play 911 with my own voice and have all this environment crepping me out.
The Karen was really funny.

2- The monster wasnt really needed, sure it could represent lots of things like "its the representation of your guilt on the last call you had plus the guilt you already had for what happened at the begining of the game." but keeping him only in the environment is enough, plus you could keep the plushie thing but then when you see it on your table, make it disappear and move on with the game. (I hope the monster was just a way to end the demo and could be removed in the final game).

OR even maybe remove the monster after all!, everything else works perfectly for a real horror game. Its way better a game based on psychology horror than jumpscares (for me the game lost its horror with the monster, I just dont get scared by jumpscares :,T)

3- You could add more things in the background related to the calls. If the caller is reporting a thief, you could be able to see a darky figure breaking things on the office or you hear random footsteps in the office. If there's a fire, then your office could get some fire, etc etc...

Anyways, great demo. Hope the game could be bigger and last more than 15 game minutes. Sure with all the fame you got you could just ask volunteers for voice acting and history enrichment.

Thank you very much for the review! I’ll try to provide a little bit more information where I can.

Regarding your 2nd point there is actually a strong link between the monster and the dispatcher with a lot of clues around the office about what it is. However it doesn’t seem like anyone has figured it out yet so we maybe should’ve made it a bit more obvious.

As for your 3rd point, I agree we could do a bit more in the office but there are quite a few things that happen that are very subtle and often go unnoticed by a lot players. Also as this was only a short project (a few months) we wanted to keep the scope small. This is also why we made it roughly only 15 minutes long as we felt this is as much as one programmer could achieve in this time.

I really appreciate you taking the time to play through the game and give us such constructive feedback. Hopefully it will mean that in our next projects we can avoid some of these pitfalls. Thank you!

Thank you very much, I just finished watching your play through and I can tell where you got your name from! The blood splats were difficult to do, so I’m glad to hear our hard work paid off! :)

im up to the call where the ex husband is breaking in and after telling the daughter to run to her room, ive heard two loud bangs and now just silence, is this supposed to happen or is this a bug/glitch?

Try looking around your environment to see if there is anything for you to interact with, if not then it may be a bug. If that’s the case please reply to this comment and I’ll try to figure out what may have caused it :)

back to r4eport that it was indeed not a bug and all i had to do was look around the environment, and also in the last dispatch call, I've found that you wont make it if you send off the police report with the small amount of information you have, i understand if that is intentional, yet, I have only had a few instances with this i am more then happy to test it our for you if you would like :)

I tried to download the EXE file, but my computer is so tightly secured, both my antivirus and windows defender stopped the game from being open.

You could try to run it as an administrator, or try to download the zip file (Dispatch_Extract&Play) which contains all the game files. Although the voice recognition may not work with the zip version as it is unable to set permissions.

Please let me know if this works, I hope you enjoy the game!

Yeah of course you can make a server about the game and I’d love to be a part of it. My discord is Lou#0067 :)

i added you my discord is cartyem#0001

where is the dowload button

It is the green button below the contact me section :)

when i try to start the game, i get an error  after the brightness setting, it takes a few seconds then it closes the game automatically

the Picture below shows it 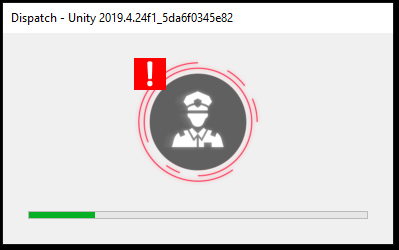 Thank you for the bug report, I’ll take a look into this.

I've implemented a potential fix, please let me know if this resolves your issue.

Thank you, yeah we thought the voice recognition was a must for this type of game! More is on the way so make sure to follow us for updates :)

Thank you playing and I’m sorry to hear the speech recognition didn’t work for you.

This can often be caused by either incorrect permissions (fixed by using the Dispatch_Setup.exe) or by windows picking up the incorrect default device which can be solved by going into your sound settings and right clicking the device you’d like to use and setting it to default then restarting the game.

thanks going to try

That sounds bad but it worked fine for me, perhaps its some system error hopefully you find the problem soon

That was incredible! You guys did so well with this, I just wish there was more to play!  Please make this into a full game, id happily buy and play it!

also, I had no idea this was going to be that type of horror game. Not gonna lie. So when scary stuff started happening, I was on the edge of my seat. Lol

Thank you, sounds like you had a tense play through! We will be making more stuff so make sure to follow our itch.io page if you’d like updates. Thanks again for your support and kind words :)

How dare the fucking demon sabotages me to save a poor child's life?

I'm not scared, i'm just getting angry.If i can i will tear him up

PLEASE MAKE THIS INTO A FULL GAME

THIS GAME IS AWESOME

what is the ag

why does the monster or ghost or whatever it is, why does it come to kill me after a little while?

How do i download it? Can someone give the steps on downloading it?

Thank you for taking the time to play it, glad you had fun!

It keeps closing the game and wont let me play

try putting your brightness to 50 thats what worked for me

AT THE END MY SOUL JUST RAN AWAY

This Game is amazing would be better if you developed the game more and added more scenes. The game would be fun if it had two stories one with the horror and one without. I enjoyed the Voice recognition that is what made it realistic.

This game is amazing! Dispatch is now my absolute favorite horror title of all time, the suspense and build-up is perfectly executed. It's able to get you so invested in the story in such a small amount of time. 10/10 I've already recommended to a friend

Thank you so much! Glad you enjoyed it and thank you for sharing it with your friend!

Oh my lord i died on the inside not typically liking horror. But this literally made me jump across the room still a great game and would like to see more calls come to the reality of the game

Thank you for taking the time to play, glad you enjoyed the scares! We will be making more games in the future so follow if you’d like updates :)

where can I be updating on the release of new games?

I fckn died inside, my soul left my body

Thank you very much!

This Game Was an amazing game looking forward to more games to come!

This was really good, I liked the concept a lot. Scared me a little bit in the end, lol.

Thank you for taking the time to play through it!

Live Premiere of this in 7 mins! If you ever think about becoming a 911 dispatch operato0, you should watch this video. I might discourage you, or it might make you want to do it MORE! Think twice though. All might not be what it seems...

Excellent play through, your reaction to the ending was very unique!

Yea The Game is Aweasome so far but I'm Waiting for the Dialogue after Sophie Screams  "my...my mom....Mom!"

Apologies, did you hear the door slam or the dad shout after the dialogue? I will try to track down what went wrong and fix it asap.

Okay, I have implemented a potential fix, please give it another go and let me know if it happens again. Sorry again for the problem.

Glad to hear it, enjoy!

The game is realy good but the gameplay is aproximatly 10min...

The concept of the game listening to your mic is Super Cool but if  there were more calls to respond  it would be certently better...

Make sure to look around your environment, there might be something to interact with!

the game crashes after i pass the brightness stream

It may be caused by the permissions not being set correctly, try the Dispatch_Setup.exe and if the issue persists please let me know!

That’s a very strange one, I’ll look into this today. Thank you for reporting it and I’m glad you found a workaround!

what a great game! You gave me the chills!

Bravo. You have managed to give me goosebumps.

Mission accomplished, thanks for playing!

Check out my video i did for Dispatch.