A downloadable game for Windows

A short, story-driven horror game that follows a police dispatcher who receives a disturbing phone call. You must make difficult decisions throughout the call to ensure the safety of the caller and yourself...

Any questions or bugs to report, leave a comment or send me an email :)

This was freaking amazing!!..i loved this game so much.I was in awe that you could actually talk and the game understands you and i had so much fun with it.Please please please make more games like that,amazing job,thank you so much for this game!!!!💜

Thank you so much for your kind words, I’m glad you enjoyed playing! We will definitely be releasing more games in the future :)

Thank you, glad you enjoyed it!

What a great game, I can't say enough good things about it! It started off so fun and simple and then it turned to chaos and tragedy very quickly! Very well made. Here is my video of it, please take a look.

Awesome game concept! I was a bit lost with the connection between the ending and the gameplay... but it was still great! Second game in the video.

Real cool game! Would have loved to see more of it! Maybe different scenarios or different endings to it. But great game non the less!

This game was so much fun! I am glad you have updated it!! Can't wait for more!!!

Reply
JadedGoddess44 days ago(+1)
This game was amazing; the voice recognition blew me away. It made it very immersive, and the buildup to what was happening in office was great too. Scared the hell out of me. 10/10 thank you~
Reply
Tomi44 days ago(+2)(-1)

What a let down. Such an amazing set up and mechanics, but that ending, not only it is too short but it is not sastisfactory at all. I hope this idea is revisited and expanded upon because the voice recognition is very clever and I can sense there is a complex story to be told here. It was a good game overall, very atmospheric and worth playing despite the bad things I see

this is one of the best itch.io horror games I've ever played

Thank you so much!

no problem! It was really fun and unique, especially the voice input mechanic

The most DISTURBING call I have ever gotten

This was unnerving and terrifying. The stress of trying to make the right choices made for a very tense and exiting experience!

This was short but interesting. Things happening around you while you deal with the calls was great when it all came together. Sounds were extremely well done.

I played this game and felt like I really was the dispatcher, it was an immersive experience that made me feel like this was a real situation in some sense. It gave me a new perspective on what it's like to be a dispatcher and deal with real-life emergencies like the one presented in this game and I'm sure it's a stressful job sometimes. Very well done!

I'm a fan of simulators and I've played quite a bit of 911 operator but this took it to a whole new level. I felt so immersed and gave me a bit of perspective of how scary it actually is to be an operator and not knowing what's going on while you're waiting on the other line. It was intense. I'd definitely love and would pay for a longer version of this game.

Really loved the mic mechanics of this and how involved it makes you in the fate of the caller. Great job

This game really showed how scary it is to be a dispatcher. The thought of making a mistake, a mistake that can cost an innocent's life is truly horrifying. This should be expanded into a bigger game with more choices and events or calls!

holy crap, this game is amazing. that jumpscare really got me too. very good graphics with a unique storyline, I need more games like this

Thank you very much for your kind words, we will be making more games in the future so follow us on our socials if you want to see what we come up with next!

Idk how to start playing

Is there multiple endings?

the game is cool but there is very little gameplay, want to play longer

I loved how unique the game felt dude.

Straight up nightmare fuel at the end amazing job :D

This ending was so unexpected, and this game is amazing.

Game was honestly creepy the moment the lights turned on on their own, very sad what happened to Sophie and her family. Was not expecting the thing to get me so hard, great experience, very well done.

I absolutely loved this game!  The voice/microphone mechanic was super cool. The game was well paced, and was incredibly immersive - I was left wanting so much more of this :D

The developers really packed a punch with this one in just a short time. It was creepy with some of the subtle changes, kept us on edge, and tested our quick decision making.

Here's a video of my brother and I playing it, if anyone is interested, but I HIGHLY recommend you experience this for yourself. Well done developers!!

Love the ambience of this game and the microphone functionality. It felt very immersive and the tensity just keep progressing as time went on. Enjoyed it till the end and thank you for making this! 2nd game.

Reply
kashbrown1233 days ago(+1)
THIS IS AMAZING!!! What an absolutely amazing idea for a game. This was so much fun, I was so upset when it ended. Are we getting more calls/ storylines somewhere down the track? God I hope so , I could play this game for hours and hours at a time! The ending though, I feel like it didn't fit the general theme even though I do understand what you were saying with it! Watch my video for a more in-depth review of this amazing game. I highly recommend this game! Please play it if you haven't already, you wont regret it! Please sub to my channel if you enjoy my video, every subscriber helps and is so appreciated! Thanks guys.
Reply
Dakk Games238 days ago(+1)

Hey guys! This was honestly a really fun game. You guys should definitely give it a try. I really loved the small details. If you guys want a preview, come check out my video! But I honestly recommend playing the game yourself to really enjoy it!

Reply
Meeka Nomicon273 days ago(+1)
Loved the game. The calls were great, they were so funny, well up to the last one. What I learned is that I would be horrible at a dispatch call centre, I saved one of them at least. Was not expecting the ending, even with all of the build up it felt like the scare came out of nowhere.

Why the jumpscares ? They're random, don't add anything at all.

I highly recommend others to play the game just for the experience. I loved how it uses voice recognition to input the choices, it gets the player to interact with the story. A change that I would make is having the dialogue be time-based, giving the play a small amount of time to input their choice, in my opinion, this would give a sense of pressure. I would have also liked to know more about what happened to the main character previously, they mention that it wasn't his "fault" for a guy's death. But other than that it was good.

I'm very confused by this game's ending. The jumpscare came out of nowhere, and it was so random that I didn't even feel scared by it, just surprised and confused. The spooks that were the rabbit plush and the file folder just seem out of place when there's no story attached to it. There's a lot of visual elements that should be connected by a narrative that just aren't. I see in other comments that these items are representative for PTSD and the whole game was a creation of the mind, but this is not in any way explored by the game itself so don't go in expecting that. It's also not really a game about being a police dispatcher, with two 'joke' calls that take away from the atmosphere and only one serious call that quickly dissolves into randomness.

I also thought the voice actor for the child was trying way too hard to be cutesy and came off unnatural.

I think the scariest part of the game is where the settings say that it has voice recognition, and the fear of what that would entail, because it doesn't seem to have come up in the game at all. 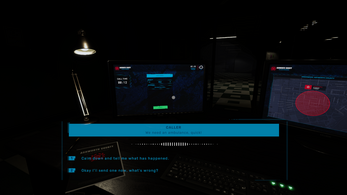 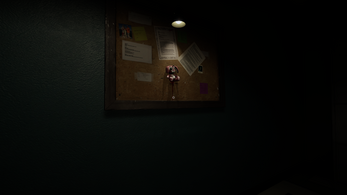 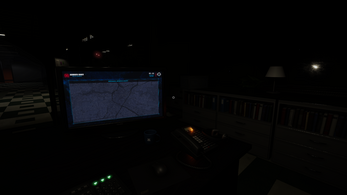